One of the main reasons we chose to holiday in Iceland was the chance to see the aurora borealis, or northern lights. It was a bucket-list item that I had planned to tick off one day, but initially didn’t plan to do so soon – I expected I would do it later in life.

Pete and I visited Iceland in March/April 2016. At the time, the sun was in a stage of high activity, producing stronger solar winds and magnetic fields which create bigger aurora events. This, coupled with the time of year we had planned our visit – just after winter for clearer skies and less cloud cover, but still dark and not affected by Summer’s midnight sun – meant we had a really good chance of seeing auroras.

In a nutshell: we had the greatest experiences viewing aurora we could have asked for. We saw the lights almost every night of our 2-and-a-bit weeks in Iceland.

I’ll run through some highlights, then give some tips on aurora hunting.

Often people say you won’t see aurora in the city, or it’s much harder to. This is true, in a way, as the light pollution can make it tricky to see the fainter light displays or photograph it well, but it can still be seen in the middle of Reykjavik.

On our first night in Reykjavik, we kept an eye on the aurora forecast and determined that it would be best for us to go out later at night, around 11pm, when the sky would be dark. We went to the shore near Sólfariđ, and waited around 20 minutes before seeing first glimpse of northern lights. Pete was setting up the camera and I noticed a streak of white in the sky which started moving gently. I excitedly told Pete and we watched and captured images of the aurora. I couldn’t believe our luck, getting to see the lights, a bucket list item, on our first night in the country!

We hung around for about an hour before getting too cold – I had yet to learn about dressing properly for arctic weather – and headed back to the apartment.

On our final night in Reykjavik, we take it easy as I am feeling unwell with the start of a cold. After dinner, we go back to the apartment to shower and rest. Pete decides to go out, just into the street outside the apartment, for one more northern lights hunt. He calls me out to see the beautiful green lights above the city, much more vivid than you would imagine for a light-polluted area. Though sick, I stand in the street outside our apartment and gaze up at the sky, marvelling at how lucky we have been to have seen this beautiful phenomenon on so many nights throughout our trip. I felt especially lucky to have seen the lights on both the first and last nights of our trip.

Our night in Skaftafell viewing the aurora was my favourite, and the most magical, night of the trip.

We had dinner at the hotel (Hótel Skaftafell) then took a nap between about 8 and 10pm before rugging up to take images and view the northern lights. The forecast was excellent, and we had to wait until it was fully dark, around 11pm, before walking behind the hotel towards the glacier we had visited earlier and choosing a spot to set up.

It wasn’t long before we got a first glimpse of light. For a while it was just a simple, slim band of light across the sky towards the west. It then began to move toward and above us in a huge curtain, dancing and shimmering. It was the most incredible display of aurora we saw for the whole trip. The light was green and white; it seemed to float down to right above our heads and stretched a long distance from north to south. We stood awestruck below, switching between reverent silence and excited shouts and loud whispers of, ‘Oh my god’, ‘Did you see that’, and ‘Look at this bit’, while pointing at particular sections. This beautiful display lasted around half an hour before fading back to a single line of light and remaining in subdued form. 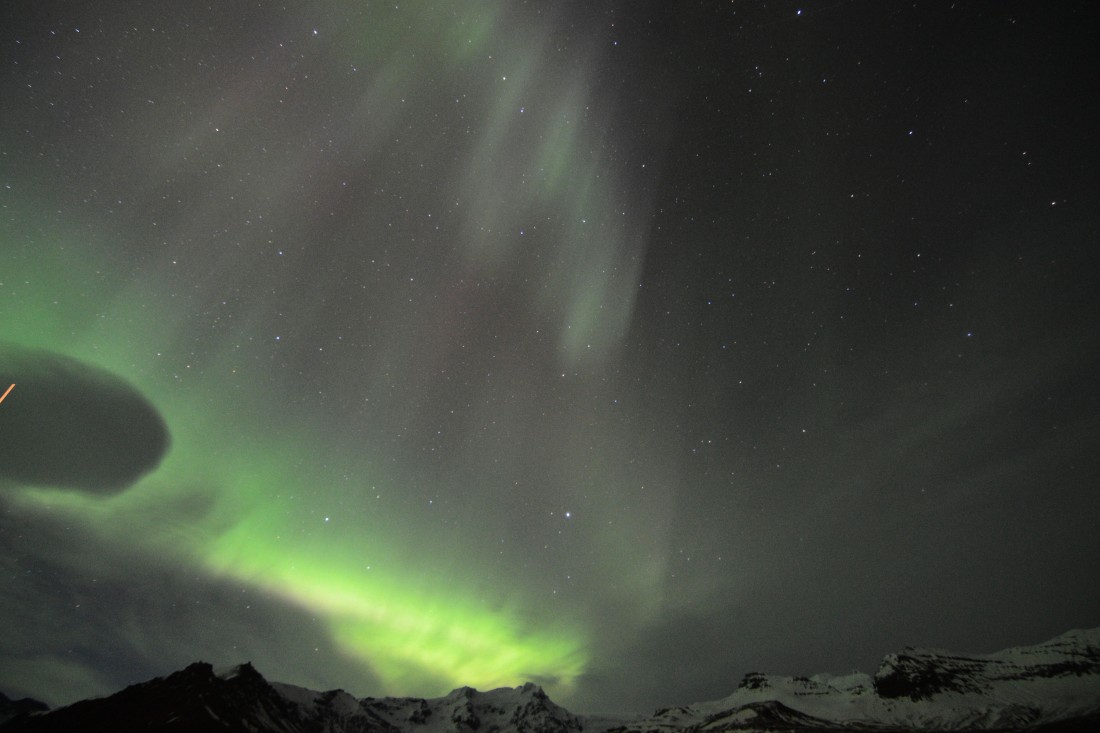 We rested in the hotel room for a bit before rugging up to seek out the northern lights. Being so far north with good conditions, we were confident of seeing a northern lights display, and so decided to drive out near where we went horse riding to have a dark spot for viewing.

Once the sky went dark we didn’t have to wait long for another spectacular aurora display to rival the night we had in Skaftafell. Peter took photos and I watched from both inside and outside of the car, depending on how long I could stand the cold. The aurora swirled and spiraled above us in bright green. We even saw bits of blue and red where the aurora was at a higher altitude. The lights occurred in sections, each with their own shapes and patters over the mountains, closer to the city, and closer to the coast. We stayed for around an hour and a half before reluctantly heading back to the hotel. It’s hard to know when to stop looking at the lights, you want to keep watching to see what they’ll do but the air is so cold it forces you back into warmth. 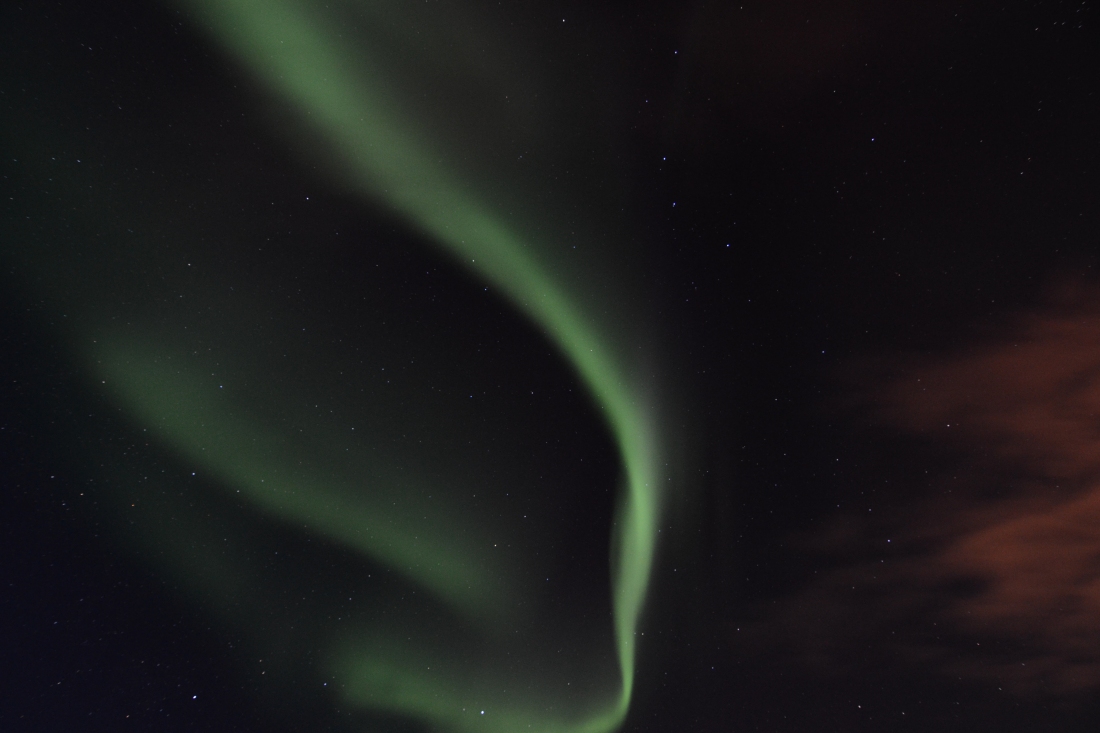 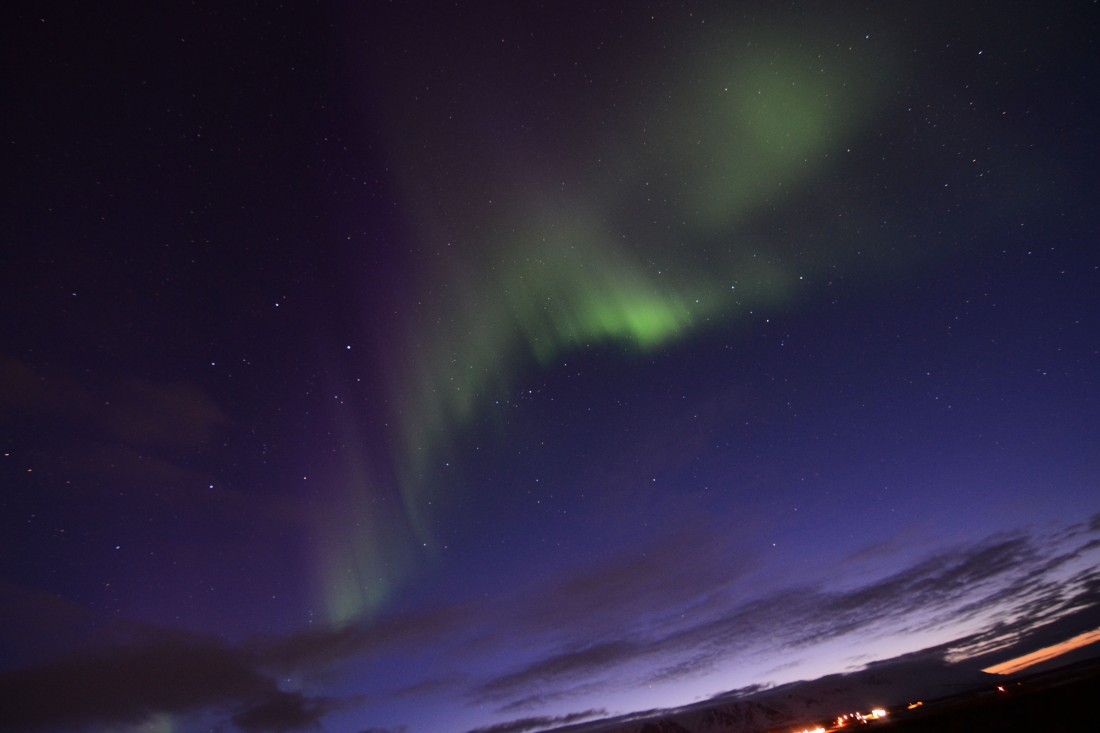 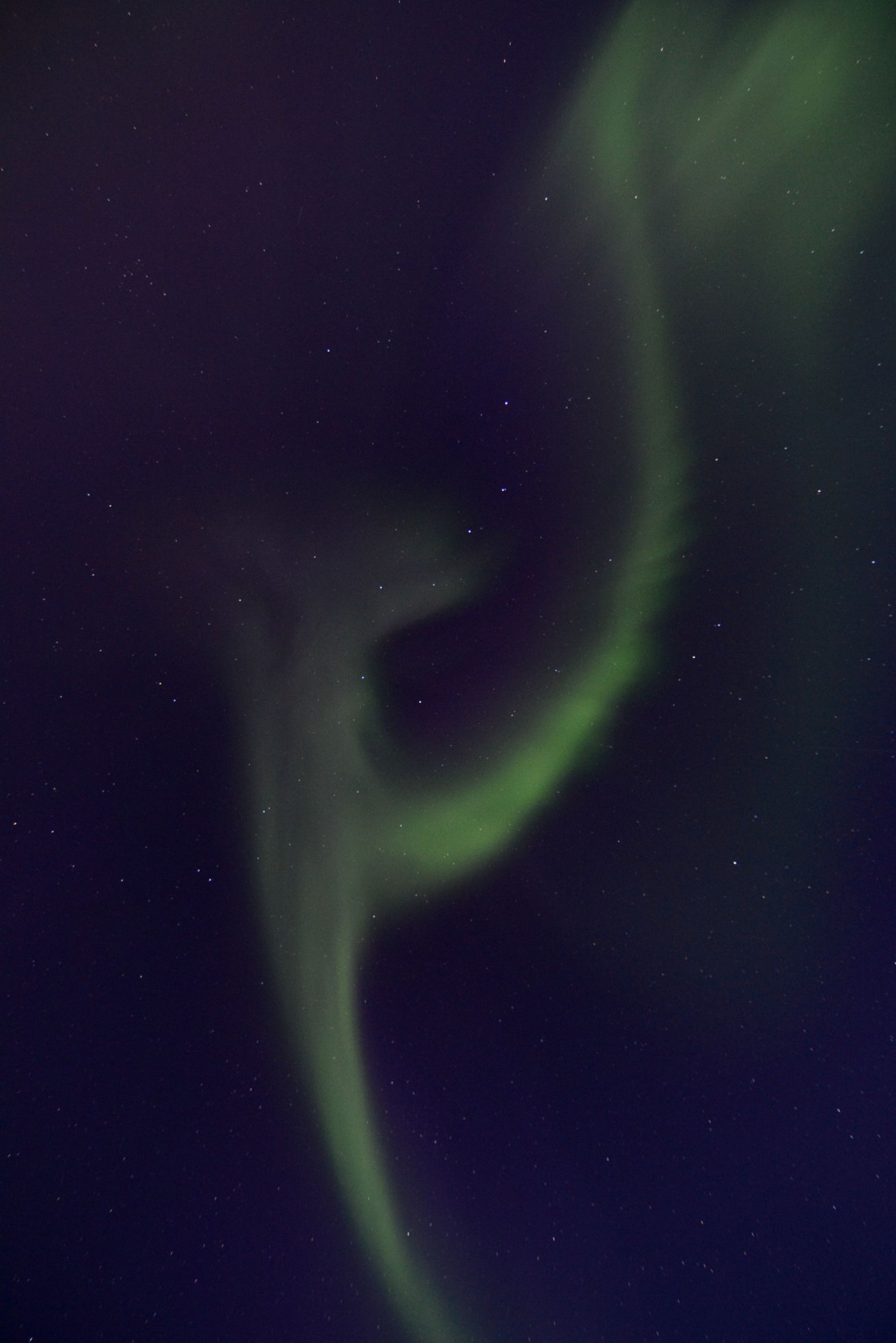 We were lucky enough to see aurora displays in Höfn, Lake Mývatn and Grundarfjörđur also. These were not as impressive as those I’ve detailed above, but special nonetheless. I remember laughing at myself for taking for granted the lights displays, especially as we got further into the trip and all I wanted to do was sleep, and not get up at 11pm to go into the cold night to watch aurora. Imagine being so spoilt with magical displays that you decide you’re happy to sit (sleep) some out!

Websites: Keep an eye on aurora forecast websites – we used http://www.aurora-service.eu/aurora-forecast/ heavily. The higher the KP reading, the more likely you are to catch aurora.

Get some sleep: depending what time of year you visit, the skies might not be fully dark until late at night, such as 11pm or midnight. This was the case for us, and why I mentioned napping so often. Take some time to sleep between dinner and aurora watching so you can stay up longer and not feel too tired (easier said than done some nights).

Rug up: as you would expect, it gets very cold at night. Make sure you wear lots of layers and good quality cold weather clothing, as you’ll likely be outdoors for a while. I especially recommend good gloves and something to cover your face.

Be patient: aurora watching takes time. As with our experience, a thin green line may become the most spectacular show you’ve ever seen. Or it might not. But you have to give the aurora time, as it changes throughout the night. Usually we spent 1–2 hours outdoors watching aurora.

Drive away from town: the best shows are going to be where there is little to no light pollution, which is actually quite achievable in a place like Iceland which is not densely populated. Take a car and drive out from the city or town you are in for better viewing conditions.

It’s not always green: most of the aurora displays we saw started off as white shapes, with no or only a little hint of green. The vivid green (and blue and red) is visible in real life, depending on the conditions, but often is amplified in photography is the result of photo editing. (I have edited our photos as little as possible, and the colours are mostly true to life, with the help of long exposures.) When watching for aurora, the white shapes are what you need to keep an eye on, and don’t discount it as cloud or similar, as you may miss out on seeing something special.

Be in the moment: Don’t worry if you don’t capture it on film, just watch and enjoy the moment. Seeing the aurora was one of the best experiences of my life, and though we got some great pictures and video, I would have been happy even if we didn’t. It was the only time I have genuinely described an experience as ‘magical’. It’s beautiful and feels otherworldly. And it’s 100% worth the cold weather and late nights.

Published by Pete and Lauren

View all posts by Pete and Lauren